the world has long since ended, but you're still here.

you are a survivor of the apocalypse who has grown tired of only living to survive. you decide to get on your rusty old scooter & ride until you can't ride any longer.

riding past the end of the world is a post-apocalyptic journal adventure about exploring what is left behind & choosing a place to stop. it requires a standard 52-card deck & a journal & pen (something to write with).

support this adventure for $3 or more for printable cards that you can fill in with your own prompts.

join my patreon for secret updates, a monthly digital postcard & early access to my games!

More emotional than I thought it might be. Just imagining the places and the issues encountered takes you to another world .... The starting and the ending point that you imagine, and everything in between, makes this a very unique game. I had added the extra end goal of (if you survive 5 days, you reach your destination) which makes the game both have a win and lose condition

I will print them later, when I am at my printer :)

On the first day of my attempt to escape what the remnants of the UN were apparently referring to as the "North American Nuclear Exclusion Zone," my scooter broke down near a rusty abandoned trailer where a bunch of racoons had just eaten all of the food inside. The racoons fled through the broken windows as soon as I entered. After thoroughly searching the entire trailer, the only thing I could find was a Cirno Nendoroid. 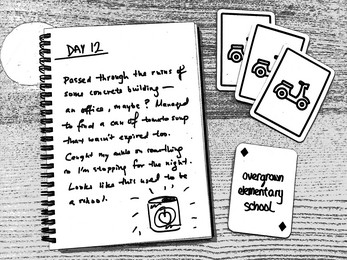 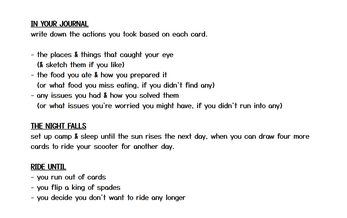 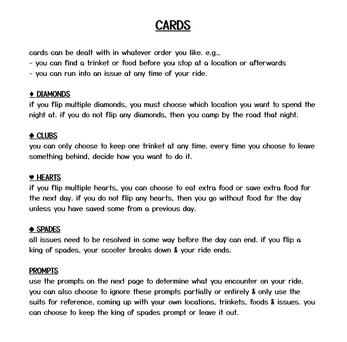